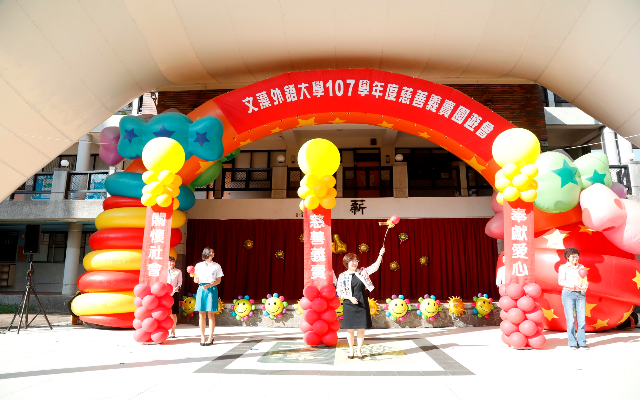 Photo: On December 1st, President Shieu-Ming Chou of Wenzao Ursuline University of Languages (middle), President Yi Zhao of the Student Association of the Day Division (left), and President Grace Lan-Hsing Jiau of the Alumni Association(right) popped the ceremonial balloon columns to announce the start of the charity fair.

Held on December 1st, the heart-warming Charity Fair hosted by Wenzao Ursuline University of Languages brought together various exotic food stands designed by its faculty and students to attract crowds. After deducting the costs, the faculty and students donated the profits to charity groups on a pro rata basis. The Tree Lighting Ceremony was held in the early evening on the campus sports field; hundreds of teachers and students lined up in the shape of a giant star, holding candle lights which sparkled in the evening sky. A 14-meter tall (about the height of 3.5 stories) Christmas tree was lighted up in the ceremony to welcome the upcoming Christmas.

The opening ceremony of the fair started with the performance by Wenzao’s wind band club and the honor guard of the National HengChun Vocational High School. In her speech, President Chou said that Wenzao first hosted the charity fair and donated the profit to charities in 1968; it has been held annually ever since then. After the speech, President Chou, President Yi Zhao of the Student Association of the Day Division, and President Grace Lan-Hsing Jiao of the Alumni Association popped the ceremonial balloon columns to announce the start of the charity fair.

There were nearly 90 creative stands designed by Wenzao’s faculty and students. To increase sales, they came up with all sorts of creative ideas to design various dishes and stands. In addition to traditional Taiwanese and aboriginal food, Southeast Asian students from Vietnam and Indonesia also set up stands to sell their hometown specialties. Other exotic cuisines included Mexican tortillas, German sausages, French toast and Thai milk tea, which attracted many people stopping by to give it a try. Fun stands such as Japanese yukata rental, pitching grid, water ball scoop, ring toss and second-hand clothes sale also drew crowds to line up and enjoy themselves.

Wenzao’s school anniversary is a day to commemorate St. Ursula, who died for her faith. Therefore, since 1968, Wenzao has hosted the charity fair on its anniversary in response to St. Ursula’s spirit of helping the poor. With its members’ love and contribution, Wenzao hopes that society will follow suit. In addition to the participation of communities from the neighborhood, Wenzao’s alumni also came back to help. Its Alumni Association and Kaohsiung City Alumni Association set up stands to greet alumni to pay a visit to their alma mater, while reliving the good old times.